The Eisele Gallery has curated an exciting exhibitionand sale of miniature rooms created by Cincinnatiminiature artist Robert Off in collaboration withacclaimed maritime artist John Stobart, whose sea scenes are also for sale. Two miniaturerooms that Off created for the exhibit depict the interior of a traditional New England WhalingMuseum with original Stobart paintings gracing the walls. 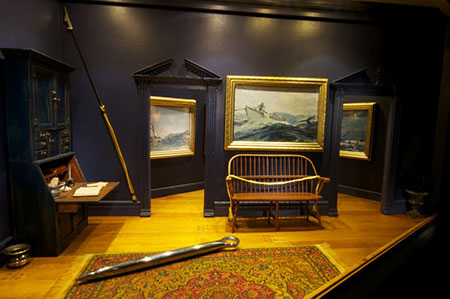 How did the collaboration occur? “I first met John Stobartwhen I was chair of the Art Committee at the UniversityClub,” Off says. Stobart gave a talk there in 1998, whichOff heard. “I have been a fan of his for a long time,”remarked Off particularly in Stobart’s use of light in thenarrative paintings which Stobart creates. Formerly a realestate broker, Off saw Stobart at a November 2011artopening held at Eisele Gallery and told him how much headmired his work.

Now a miniature room specialist, he showed John picturesof his boxes finished with reproduction paintings. “Wemust do something,” said Off. He invited Stobart to his studio, went to lunch and a partnershipwas born. “Have you ever thought about a collaboration?” Off asked Stobart. Initially, Stobartreplied, “No.” Twenty minutes later, Stobart said, “I really want to do this. What do you have inmind?” They both went home and returned to meet together with a draft of plans.

From there developed a collaboration and friendship between Off and Stobart that resulted inminiature boxes complete with original paintings by Stobart. Stobart realized that the paintingshad to be flatter, without a lot of detail, and the process took longer than he thought. “We bothenjoyed working with each other,” said Off. “It was a happy artistic collaboration that centeredaround these boxes starting three years ago and ending this year. Life is too short to do thesame thing over and over,” commented Off. “We get to work and meet with people you admire.”Sales are the validation you receive from the creation of art, he noted.

Another interconnection is Eisele’s representation of Stobart’s work after Closson’s closed in2010. Born in England in 1929, Stobart concentrated on sea scenes, including Cincinnatiriverfront vistas. Fourteen original Stobart paintings priced from $26,000 to $325,000 are in thisshow along with two boxes made by Off.

Entitled “Contemporary Whaling Museum” and “New England Whaling Museum,” both boxessold for several thousands of dollars. The Kentucky Gateway Museum in Maysville bought thelatter box and added it to the Kathleen Savage Browning Miniatures Collection. On the walls ofthe box are original Stobart paintings and scrimshaw. In the living room resides a captain’schair. As a surprise, Stobart often hides a bottle in many of his paintings.

With a family house in Hyannisport, Massachusetts on Cape Cod, Off developed a love for thesea at an early age. Fascinated by the ocean, he crewed on various boats and took a year aftercollege to sail all over the Atlantic. Thus, his interest in maritime themes, which eventuallyextended to art.

Also as a child, his father taughthim to paint miniature solders,which prompted his interest inminiature art. Furthering hispassion, Off collectedcontemporary art and served onthe boards of the ContemporaryArt Center and The Taft Museum.

Further inspired by a Mrs. JamesThorne, an ardent collector ofminiature rooms exhibited at theChicago Art Institute, Off begancreating rooms. “My artistic intentis spiritual, rather thanmaterialistic: I create throughspace, composition and light.” Thescale of his rooms is 1 inch to 1 foot. The boxes are meant to slide into an existing bookcaseand measure 12” x 24” x 12”. Each piece is fabricated, measured and drawn with eachaccessory – fireplaces, wallpaper, et al – purchased with their arrangement and placementdesigned by Off. “The controlling of contrast is at the heart of the artistry,” said Off.

In grammar school, Stobart developed an instinct for drawing by age six. “You’re never going toput bread on your table,” his father told him. He enrolled in Derby College of Art in 1946 wherehe achieved high honors and a county scholarship to London’s Royal Academy. Because thearchitecture along the river Thames fascinated him, he began to exhibit small landscapespainted in the countryside outside London. On a ship that visited Africa, he stopped in manyports and painted ships. John Constable, a landscape English painter (1776 – 1837), heavilyinfluenced Stobart’s paintings.

Both Off and Stobart attribute some of their success to hard work and dedication. They haveboth put in the hours. Stobart finds an emotional lift to do miniature painting; it takes a lot of timeand represents a challenge. He commented that miniatures are more in the European traditionof craftsmanship. With an obligation to produce works for a gallery, he said “You need to beinspired.” But, at the same time, he found the culture of art in jeopardy. “I fought to get where Iam,” he said. Off remarked he loves working with his hands. Whereas in real estate, he workedlarge deals, in art, he has a tactile response to his craft. Stobart claimed, “I am painting forposterity. Look what you’ve left behind.”

They chose the fall to collaborate on the show because it is the time of year for gift purchasing.“You have to expose yourself,” said Stobart by giving talks. With 12 to 15 boxes in circulation,Off said it takes him about three months to create a room; the same time it takes Stobart tocreate a painting. “Art should be fun and exciting,” said Bob Off.

This is an unusual pairing of works at the Eisele Gallery, but worth the visit.